Celebrating a Cubist's birthday and exploring the parasocial | #sol21 Day 23

My Draft title was [whatever today's post turns into]. Possibilities: "Today's mindworm is winning" and "About the illusory parasocial even if it's not real." Searching for just the right image, most of the image were marketing graphics, flow charts and misfit memes. So I tried Google Arts and Culture for abstract art, which somehow felt a better fit for the parasocial. The inherent askewness of both... 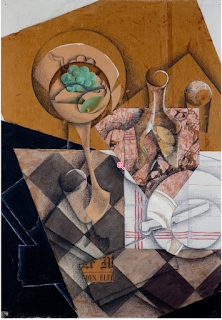 Eureka! I settled on "Fruit Bowl with Bottle" (1914, public domaim) by Cubist Juan Gris because today is his birthday.

Notes on morning (mostly) news routine: initiated checking Google News simultaneously with alt.news media. The resulting contrasts sure do expose coverage gaps and remind me yet again to deep dive often and monitor personal confirmation bias. Checking the MBFC button on my toolbar is automatic.

Parasocial interaction (PSI) refers to a kind of psychological relationship  experienced by an audience in their mediated encounters with performers in the mass media, particularly on television. Viewers or listeners come to consider media personalities as friends, despite having limited interactions with them. PSI is described as an illusionary experience, such that media audiences interact with personas (e.g., talk show hosts, celebrities, fictional characters, social media influencers) as if they are engaged in a  reciprocal relationship with them. The term was coined by Donald Horton and Richard Wohl in 1956. [emphasis added]

Previous mindworms include "MSM Reaction to Substack as Alt.Media Journalism" and "Vaccination Freedom and Post-Pandemic Stress (PPS)." Sorry, they have no permalinks...yet.

Posts tagged #sol21 are part of this year's blogging  challenges  hosted by Two Writing Teachers, which include SOLSC, the annual 31 day writing streak March challenge and a more modest weekly #SoL Tuesday invitation to serve up and share snapshots (aka slices) of life through writing. Read more posts by taday's slicers here

Posted by Vanessa Vaile at 9:55 PM 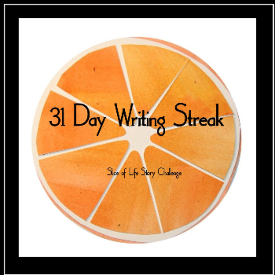